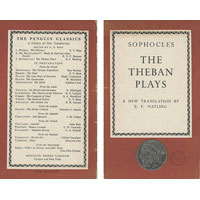 The legends surrounding the royal house of Thebes inspired Sophocles to create a powerful trilogy of mankind's struggle aginst fate.

KING OEDIPUS tells of a man who brings pestilence to Thebes for crimes he doesn't realise he has committed, and then inflicts a brutal punishment on himself. It is a devastating portrayl of a ruler brought down by his own oath. OEDIPUS AT COLONUS provides a fitting conclusion to the life of the aged and blinded king, while ANTIGONE depicts the fall of the next generation through the conflict between a young woman ruled by her conscience and a king too confident in his own authority.

Sophocles was born in 496 BC. His long life spanned the rise and decline of the Athenian Empire. He wrote over a hundred plays, many of which are published as Penguin Classics, drawing on a wide and varied range of themes.

E.F. Watling translated a range of Greek and Roman plays for Penguin, including the seven plays of Sophocles and the tragedies of Seneca.