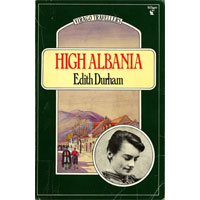 Edith Durham, 1863-1944, explored the Balkans in the 1900's and 1910's. She did this on her own, learning the languages and cultures in her middle age, traveling and living under primitive conditions, with the constant threat of violence, disease, and war as World War I loomed and the Ottoman Empire finally disintegrated.

Her books are a combination of anthropology, travelog, and voice of political reason (calling for self-determination of the many Balkan groups, wishing for tolerance among them, and restraint of the major powers meddling in the region).