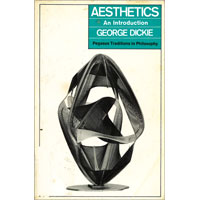 This book is an introduction to aesthetics, from the perspective of analytic philosophy. It traces aesthetics from its ancient beginnings through the changes it underwent in the eighteenth, nineteenth, and the first half of the twentieth century. The responses in the 1960s of the cultural theories to these earlier developments are discussed in detail. Five traditional art evaluational theories, Beardsley's and Goodman's evaluational theories, and the author's own evaluational theory are presented. Four miscellaneous topics are discussed - internationalist criticism, symbolism, metaphor, and expression.
Pegasus Publications (October 1971).