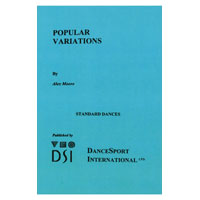 Although there are about seventy basic steps and standard variations in the four standard dances, the English Style of Dancing has progressed to such an extent during the past few years that numerous “new” variations have appeared each season.

From the hundreds of new variations which have been introduced from time to time a few in each dance become popular, and some years ago the Imperial Society of Teachers of Dancing selected the best of these and standardised them un the title of “Named Variations.”

Many of the variations in this book are based on these “Named Variations” and the keen student and teacher will find full technical details of these figures in the new edition of the book “The Revised Technique of Ballroom Dancing.”

Since the first edition was published many new names have crept into the dancer’s vocabulary. Such names as “The Big Top,” “The Chase,” “Kangaroo Hop,” “Eros,” “Jete,” “Throwaway” and “X” lines may confuse the uninitiated, but the reader will find that examples of these and many other variations are described in this book.

It is important to remember that a variation is not good just because it is new, or difficult. Some of the most simple figures in this book are used by competition and demonstration couples. Good style and a flowing movement will always be the aim of the best exponents of English Dancing.